Sexual harassment has a high profile at present in a number of areas. In the film industry it came to the fore with the shocking accusations made of the film director Harvey Weinstein in October 2017.

One in five women working in Westminster have reported sexual Harassment. According to research from the TUC, more than half of all woman and nearly 2 in 3 women aged 18-24 have experienced sexual harassment at work. There is also increasing reporting of men being sexually harassed.

UK sexual harassment law is covered by the Equality Act 2010, which defines harassment as:

‘Unwanted conduct related to a relevant protected characteristic, which has the purpose or effect of violating an individual’s dignity or creating an intimidating, hostile, degrading, humiliating or offensive environment for that individual.’

Examples include: jokes of a sexual nature, sharing, showing, or accessing pornography at work, cat calling, sexual assault and sexual remarks including comments on appearance of body.

Sexual harassment victimisation can be defined as where a person submits to, or rejects, the above behaviour and suffers as a result. For example, a manager makes a sexual approach to an employee who rejects the attention. The employee then goes for a promotion and is rejected on the grounds of that rejection.

You do not need to have previously objected to someone’s behaviour for it to be considered unwanted.

Sexual harassment can be communicated in different ways for example by email or in texts or other digital communication.

In January 2020 the Equality and Human Rights Commission (EHRC) released new guidance to employers on dealing with sexual harassment in the workplace. The guidance states that all businesses must make sure that “employees come to work knowing they will be safe and protected from discrimination, victimisation and harassment of any kind”.

An employee may want to raise the issue informally with their line manager or they may seek to inform HR about the issue. This is an important first step for dealing with sexual harassment and could allow an informal mediation between the employees involved to come to an amicable solution.

However, an employee may want to raise a formal grievance through the company’s procedures. This should be made in writing and focus on the facts of any sexual harassment incident. It will usually be the line manager that deals with this but if the complaint is about the line manager then an employee should seek out another manager or HR to raise the grievance with. An employer should remain fair, reasonable and objective when dealing with a grievance, be empathetic to the situation and investigate any allegations thoroughly. They should seek to resolve the issue before it is potentially taken to an employment tribunal by the employee.

During an investigation by the employer the accused employee may be suspended or transferred to another area of the business whilst it is being undertaken. This is a temporary measure and may allow for a safer working environment and negate the possibility of victimisation after a grievance has been raised.

If the sexual harassment is particularly serious, for example, amounting to sexual assault, then an employee may raise the issue with the police. If this happens it does not negate the need for the employer to still carry out a proper investigation of the issue and deal with the matter in an employment context. This could involve suspending or dismissing the accused employee after carrying out a thorough and reasonable investigation. 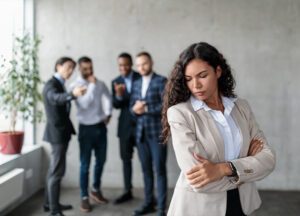 If you would like to discuss an incident or situation where you feel that you have been sexually harassed, then please call us in the strictest confidence.

Dress Codes: Sexism in the Workplace?

For a long time, many companies have different ideas and rules of what the dress code should be in the...
Read more

What Questions should I ask at a Redundancy Consultation Meeting?

Redundancies are a tough and testing time for employees, and the immediate shock of the situation can mean that employee’s...
Read more

Our philosophy puts you, the client, at the heart of everything we do. We pride ourselves on offering clear, concise,...
Read more

Do you need help? Request a consultation now.

KLG are always here to help. To arrange a free 15 minute introductory consultation call, where we can identify your needs and show you how we can support your business or you as an individual. Please complete our form.